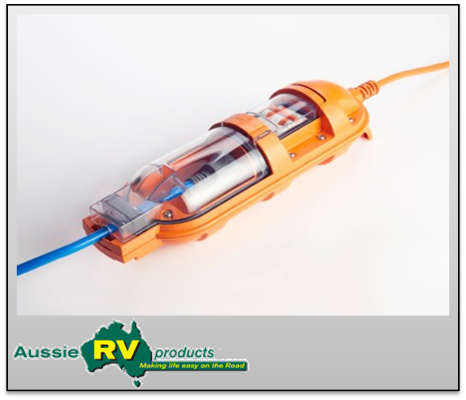 The RV-02MAX serves three purposes, the first is to make it possible to connect your 15amp device e.g. a caravan, to a standard household powerpoint.  The second is to ensure the safety of the users of the power equipment plugged into it from electric shock, and the third is to protect the electric circuit from being overloaded by the device plugged into it.

The RV-02MAX incorporates two safety devices, one being earth leakage protection via a Residual Current Device (RCD) and the other an overload device.

New features now included in the RV02MAX are:

An RCD is incorporated to protect users from electric shock through faulty devices.  An RCD senses the smallest abnormality in the power being consumed by the device and switches off;  its sole purpose is to save lives from electrocution.

The overload protection is what makes connecting a 15amp device to a 10amp standard powerpoint possible, as it protects the electrical circuit by switching off if the power being consumed is greater then the circuit's safe level of 10amps....

A common application for the RV-02MAX would be with a caravan or motorhome that does not have an RCD device installed.  If RCD protection is not installed in the device to be used with the AMPFIBIAN® then the RV-02MAX is the model for you.